Rotary watches are an award-winning worldwide brand of classic timepieces. A Swiss man named Moise Dreyfuss from a small Swiss town founded the company all the way back in 1895. The Dreyfuss Group still owns and expanding Rotary Watches after over 100 years. Moise had an extreme passion for creating elegant watches which helped drive the company into opening a UK office after just 12 years.

The ever present Rotary winged logo, of which can be seen above, was introduced in 1925 under the new leadership of Teddy Dreyfuss. From here, the brand developed further by creating innovative timepieces and memorable advertising campaigns such as the one seen here.

In today’s age, Rotary watches are sold in 65 different countries by blending the ‘old with the new’.

Rotary’s relationship with the war:

Rotary has a 100 year long relationship with The British Armed Forces, having provided watches for those who fought in the First World War to becoming the official supplier in the Second World War. To further strengthen their relationship with the war, Rotary Watches have teamed up with The Royal British Legion. The Royal British Legion are a charity who help and provide support to soldiers and the friends of the commonwealth nations who have come to the aid of Britain in defending its freedoms, values and way of life by ‘remembering together’.

The Royal British Legion’s logo is the well-known poppy flower. A poppy flower is used to remember Armistice day on the 11th of November, also known as the end of The First World War. The flowers were a common site on the battlefield by sticking out from the hard, wet and cold environment. A Canandian Doctor who served in Ypres 1915 called John McCrae took inspiration from the Poppy’s and wrote one of the most famous poems in history from it, ‘In Flanders Field’. 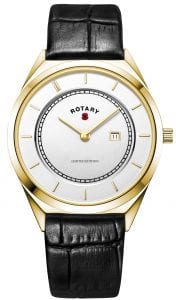 In 2018 Rotary created a limited edition watch to remember 100 years since the end of The First World War. The watch, of which can be found in our store, was limited to just 1,918 pieces. A thank you and message of ‘All Who Served, Sacrificed, And Changed Our War’ are found on the case back alongside the serial number. At the 12 o’clock position on the dial is the Poppy flower, to remember those affected by the War. The Poppy is linked through the 11 o’clock index and date being coated in red. 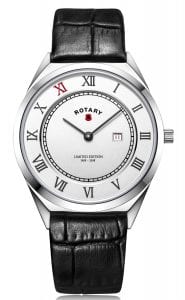 In 2019 Rotary have released another commemorative piece similar to its predecessor, this time with 1,000 available and in a gold PVD stainless steel case, again available in store. This time on the case back is an illustration of Poppy’s to resemble Flanders Field.

Both of these watches come in a limited edition box and a leaflet explaining Rotary’s partnership with The British Legion. Furthermore, on the reverse of the leaflet is a space to put your own unique serial number.

Each purchase results in £13.25 being paid by Rotary themselves to The Royal British Legion. They give all taxable profits to supporting the great work that the charity does including; providing financial, social and emotional support to the members and veterans of the British Armed Forces, their families and dependent.