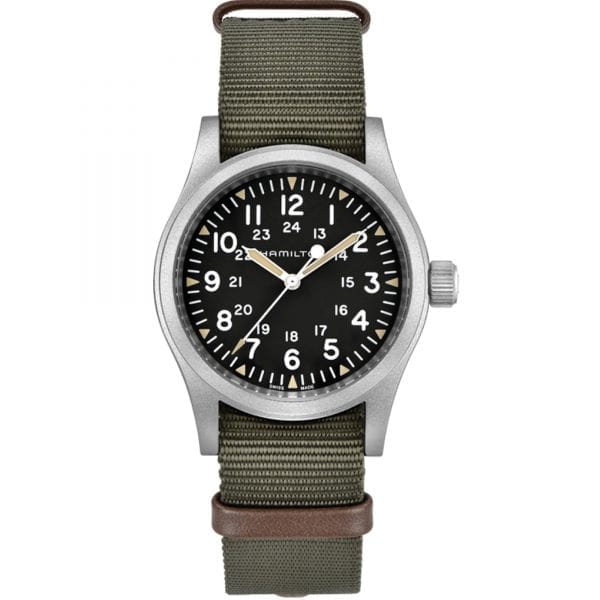 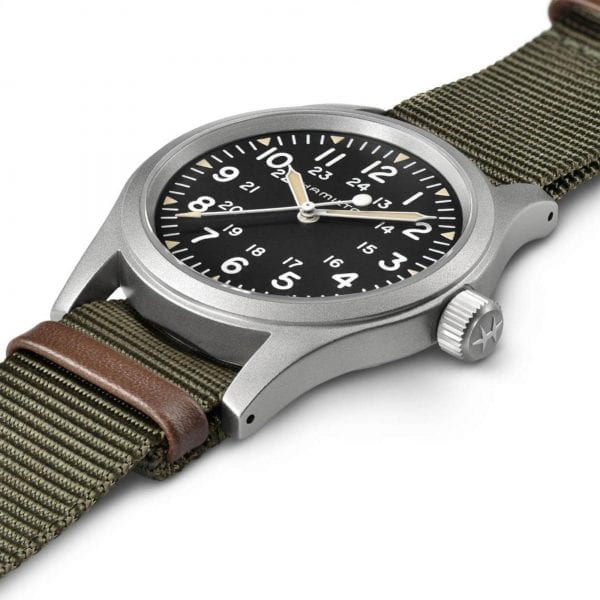 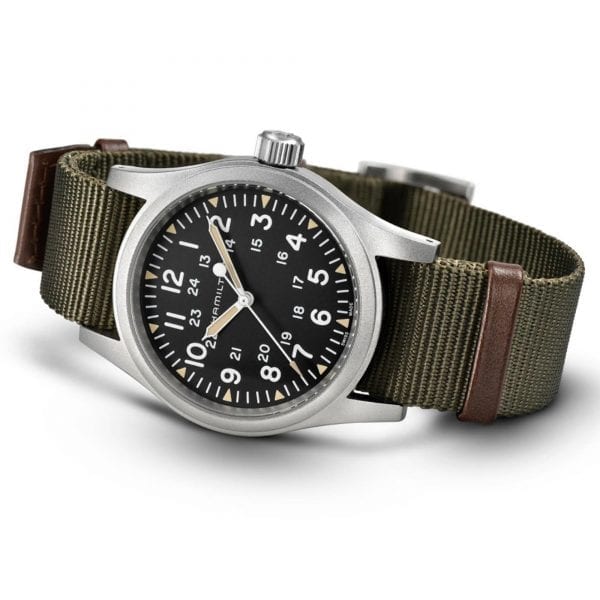 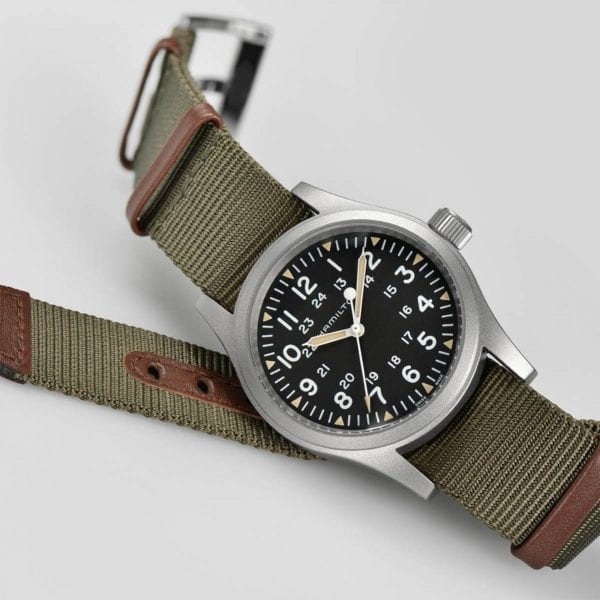 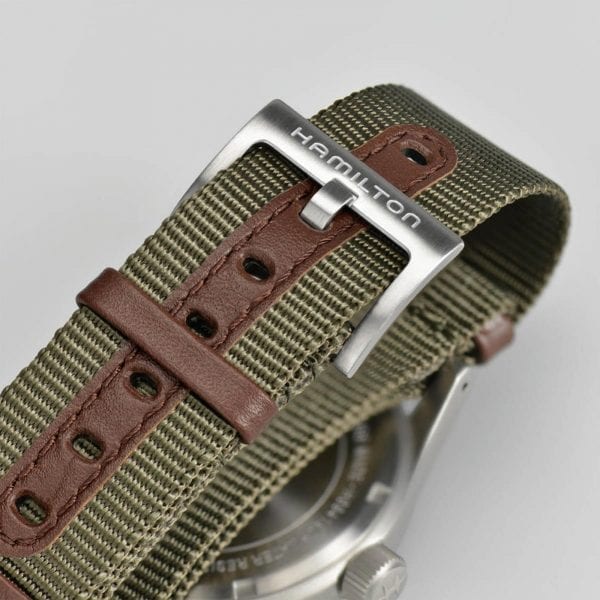 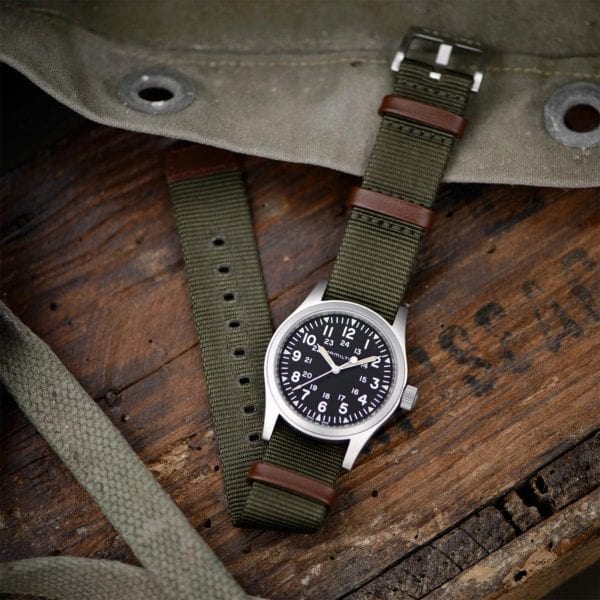 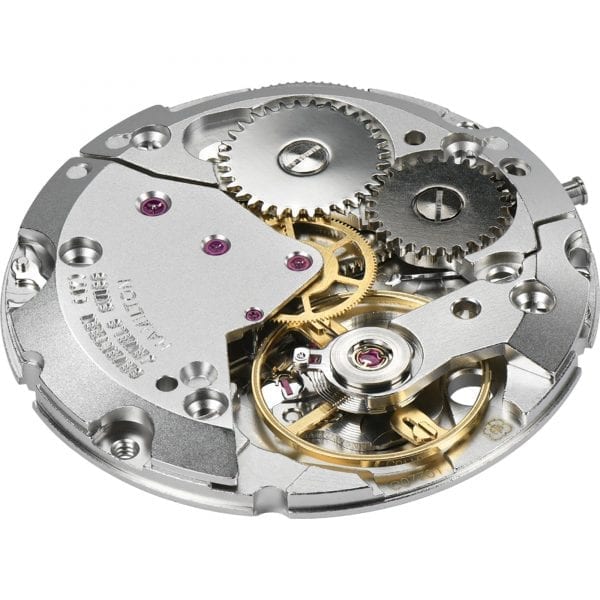 Make Us An Offer

This Hamilton Khaki Field H69439931 is a faithful recreation of its original 1960s forebear and is true to Hamilton’s military heritage. Inspired by the military, built to last, this is the original soldier’s watch.

The case is a beautiful matte stainless steel case. The diameter is 38mm making it modern and allowing it to comfortably fit a range of wrists. The lug to lug is 47mm. The Khaki Field Mechanical also has drilled lugs, which allows for quick strap changes. The case back bears the Hamilton logo and name, in addition to “Swiss Made”, depth rating, model number, and “35X PSQ HPO”.

The dial of the watch is black, which accentuates the white arabic numerals and dot markers every five minutes, as well as the white minute marks and further sub ticks to break down each minute/second into five parts. The dial also features the ‘Hamilton’ logo in the same white tone, as well as ‘Khaki Automatic’ being situated above the 6 o’clock mark. A subtle nod to the watches militaristic roots is the military time feature in the inner ring. This is currently the only available watch in the Khaki Field collection devoid of a date window. The omission creates balance, a clean look, and an overall nod to the original watch.

It also features stylish syringe hands for both hour and minute, they have a elegant pointer at the ends of each of them. They consist of super-Luminova is what Hamilton calls “sand colored,” but it’s probably best described as faux patina., with a delicate silver polished outline on them, which brings a real spark to them when the light catches them. The inclusion of an arrow hand design for the second hand is an eye-catching feature that gives a modern look to the piece.

Domed scratch-resistant sapphire glass blends perfectly into the fixed, bezel, giving the watch a very clean appearance. A ‘H’ embossed, silver crown is situated next to the 3 o’clock marker, reminding the wearer that this is a field watch, it also gives the watch a masculine feel. Hacking functionality has also been applied so that when the crown is pulled out the time will stop. It is also manual winding.

The bracelet is a real quality feature of this timepiece. It consists of khaki green nato strap, with a brown leather trim. Adding a touch of class and sophistication to the piece. It gives the watch a complete look.

The H-50 is an exclusive calibre specifically developed by Hamilton for hand-winding watches. A hand-winding watch is powered by spinning the crown at the 3 o’clock position, which in turns charges a spring bar to keep the hands ticking. The H-50 is available with or without a date function and has an extended power reserve of up to 80 hours, ensuring maximum reliability even when it is not wound for a few days. Another great feature of this watch is that the indexes are covered in a luminescent material, allowing for easy visibility at night or in the dark when conducting a stealth mission.

This watch has a water resistance rating of 50 metres, making it suitable for surface swimming.

Rugged and ready for the outdoors, the Hamilton Khaki Field collection combines easy-to-red dials with bold styling. Also there are plenty of stand out features on offer across the Khaki Field family. They include chronographs, day/date indicators and titanium case construction, meaning that this rugged appeal doesn’t come at the expense of quality.

The Khaki Field range pays homage to the Hamilton watches used by the United States military in 1910.

The watch also features in Liam Neeson’s crime thriller, A Walk Among The Tombstones. Adding to the list of Hamilton appearances on the big screen.

Since its foundation in 1892, Hamilton has amassed a reputation as the ultimate provider of accurate timekeeping combined with stylish design. In 1912, the company began producing pocket watches so accurate that they earned the title of “The Watch of Railroad Accuracy.” This lead to the brand being bestowed with the prestigious rank of supplier to the US military at the outbreak of both world wars, and American involvement in the Second World War saw the pioneering Hamilton Marine Chronometer become an invaluable navigational tool for the U.S. Navy.

Also, Hamilton in the post-war years has been defined by its unique and exclusive relationship with Hollywood. Beginning with the 1951 Frogman, Hamilton watches have featured in over 450 films and on the wrist of Elvis Presley. Still a global force, Hamilton watches offer a combination of heritage, Swiss workings and a touch of Hollywood lair.