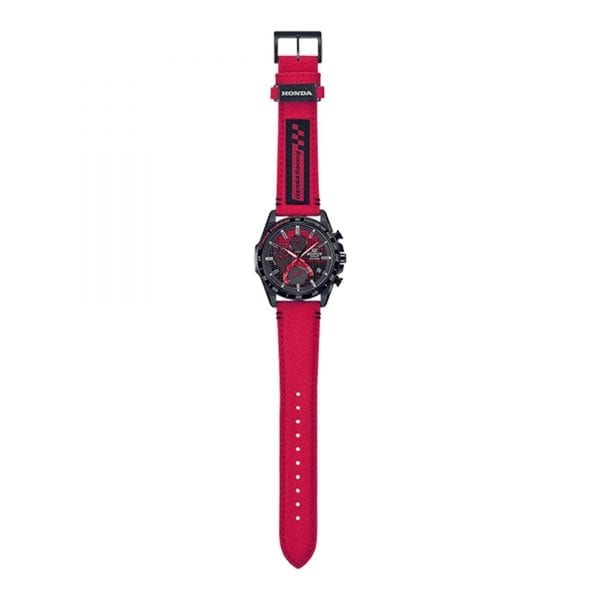 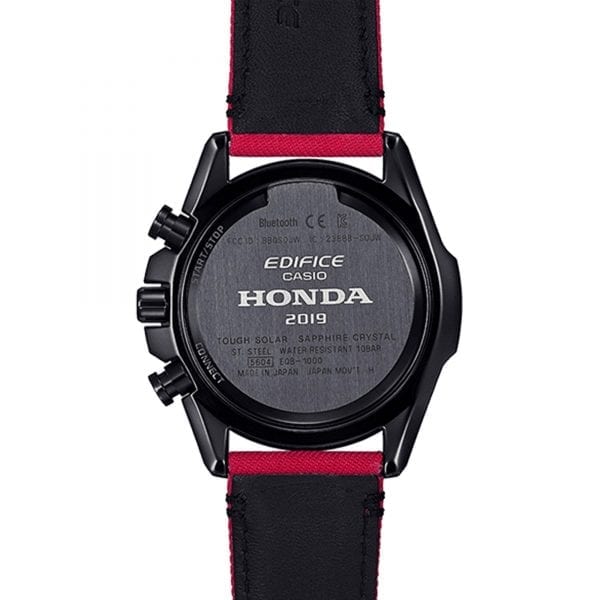 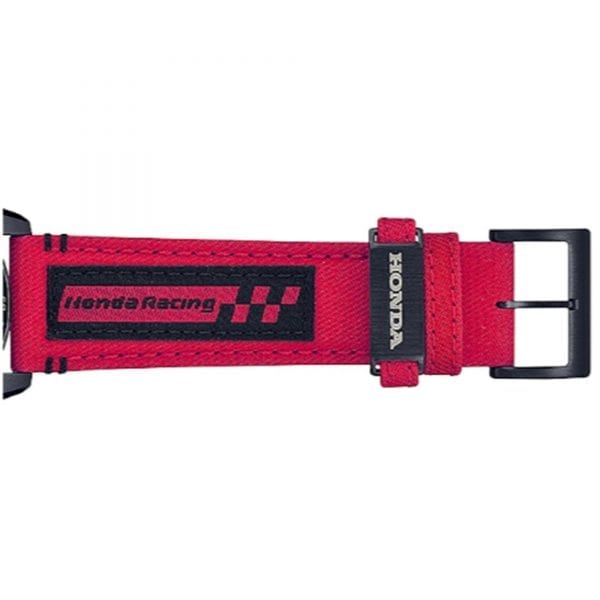 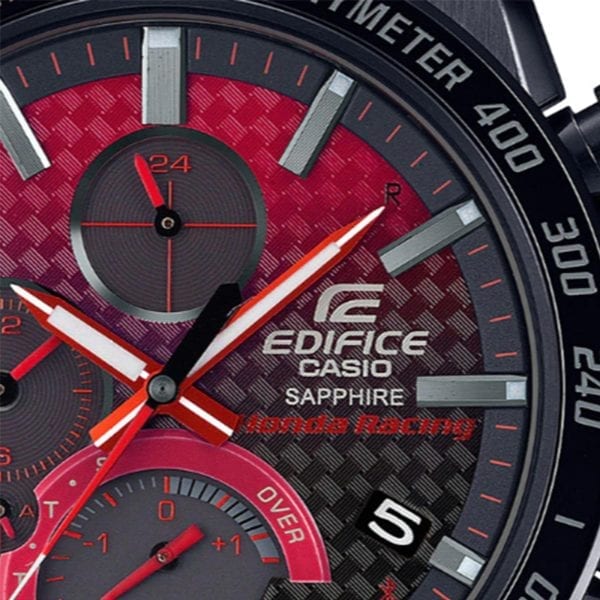 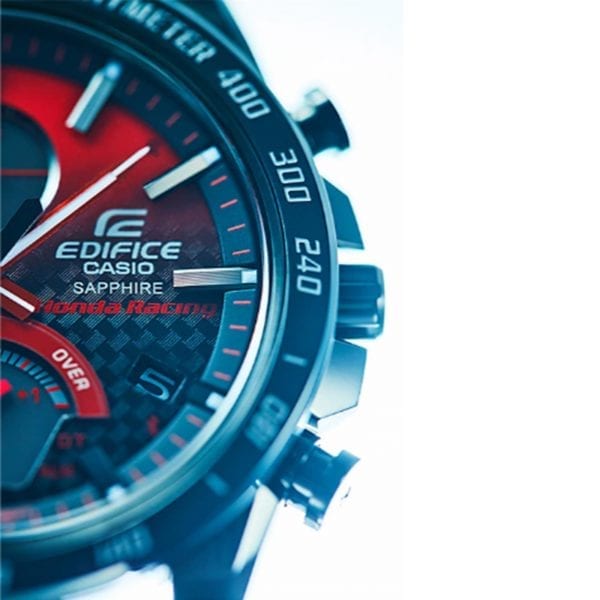 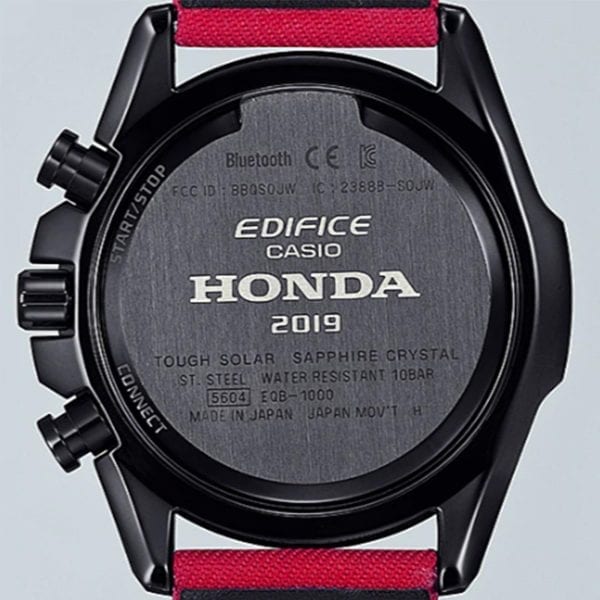 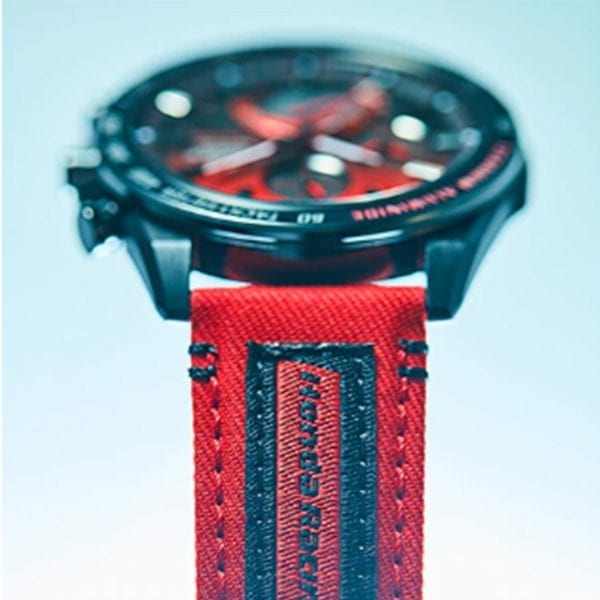 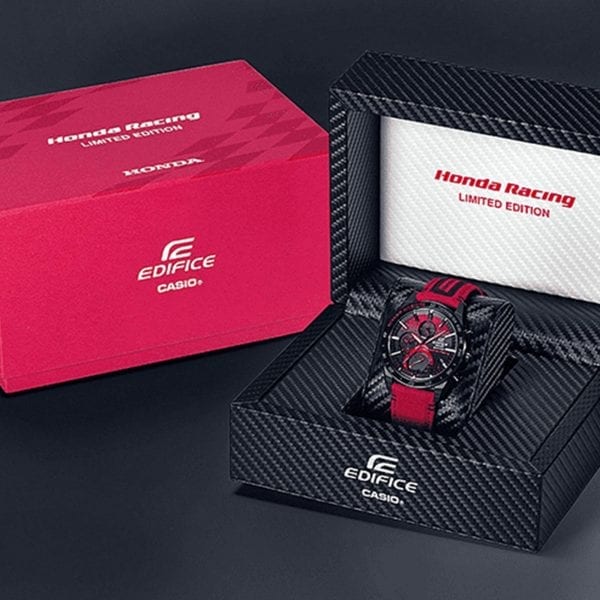 The second collaboration between EDIFICE and Honda Racing. Honda Racing and EDIFICE are Japanese brands that are constantly meeting the challenges of motor sports. Both brands are very much a part of the Formula 1 scene, and these models were developed in cooperation with the HRD Sakura R&D facility, which develops Honda automotive technology. EQB-1000HR features red and black gradations on the face to capture the image of the instant that a spark ignites the fuel.

Inspired by the Honda race car, this model sports the team’s red and black colours. The colours can be seen on the dial, hands and bezel. At the 3 o’clock position is the Casio Edifice logo alongside the Honda Racing logo. Additionally, the sub dial at the 6 o’clock position is designed to look like a fuel gauge.

Modelling a steel band that has been ion plated for outstanding wear resistance, this watch is both striking and sophisticated. The bezel is the first in the EDIFICE lineup to be made of titanium, which is the same material used for the engine valves of the Honda Formula 1 power unit. The result is a chronograph that is literally equipped with Honda Racing parts.

Valves must be able to withstand the force of explosions inside the combustion chambers of the engine. At the same time, they must balance the needs of heat resistance, hardness, and low inertia weight in order to achieve the reciprocating motion that at times can reach speeds of more than 100 times per second. Titanium alminide not only makes this possible, its light weight and durability also makes for a quality timepiece. The same diamond-like carbon coating that is applied to harden the interior of the combustion chamber of a Honda Formula 1 engine and protect it from wear is also used for the bezel. The nylon band of this model has Kevlar inserts, and its red coloring matches that of the Honda Racing identity.

The base model of this new timepieces is the high-spec, slim EQB-1000 chronograph. Bluetooth Smartphone Link, a Tough Solar power system that enables charging even by exposure to fluorescent light, and chronograph timekeeping all come packed into a configuration that is a mere 8.9 mm thin. The result is a powerful timepiece that is thinner and lighter, and that provides a more comfortable fit.

Phone Linking enables a host of useful features and functions, including accurate timekeeping, selection from among 300 World Time cities, transfer of 200 lap time records from the watch to the phone, recording of times in units of 1/1000 of a second, and more. Time is literally of the essence and needs to be managed with precision, so teams are constantly fighting the clock to avoid penalties. World Time capabilities are also essential because Honda Racing Formula 1 engineers need to take part in 21 races around the globe while maintaining contact with their R&D team in Japan.

This watch has a water resistance of 100 metres, making it suitable for swimming and snorkelling.

Casio’s Edifice collection takes its inspiration from F1 cars, resulting in a collection that combine dynamic form with detailed faces. Furthermore, higher end models feature Casio’s exclusive Multi Mission Drive movement, in which the watch is comprised of five separate motors to ensure that power is never diverted from the hands. Also, designed to offer what Casio say will be ‘Speed and Intelligence,’ the Edifice range offers motorsport precision engineering in a watch.

Casio was established in 1946 by Japanese engineer Tadao Kashio. The company entered the timepiece market in 1974 with the release of the Casiotron, the world’s first Auto Calendar watch. Only eleven years after entering this field, Casio completely reshaped global thought about the function a watch should perform with the release of the pioneering and now legendary G-Shock family. Innovation and world firsts have defined the company’s history ever since, the most striking of these being the release of the first ever touch screen watch in 1991, 24 years before the Apple Watch, and the first ever wrist camera watch in 2000. In short, Casio was producing smartwatches decades before the term had even been coined. Add to this the hipster popularity of the company’s retro designs, and Casio has firmly cemented its reputation as a famously reliable and precise name in both analogue and digital watches.