A younger audience in exchange for $100 million dollars. That is the deal Movado has struck with the millennial-focused, influencer-marketed MVMT watches. It’s an astute move from the watch super group, and should keep them relevant while cultivating potentially lifelong associations with consumers. That’s only the up-front cost, by the way; there’s a further $100 million dollars to come after that. 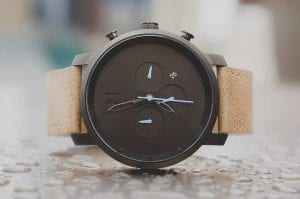 The purists are up in arms. In their eyes, the appeal of MVMT is unfathomable. As one comment on Hodinkee pointed out  about MVMT’s customers: “they’d be better off with an entry-level Hamilton, Tissot, or Seiko, but those are invisible to that demographic. Nothing wrong with that, but let’s just call it out.” Another went on to describe the company’s output as “all hype with Chinese quality.” To them, MVMT watches are a swindle and the brand’s customers have been hoodwinked. What they don’t realise is that neither the target audience or MVMT’s owners care.

Jacob Kassan and Kramer LaPlante started MVMT in 2013, with a vision to sell the kind of watches their friends would want to buy. Within just four years, their company achieved a revenue of around $71 million dollars. This was all without any outside investors, so Kassan and LaPlante, along with the company’s 40 employees, own 100 percent of the company, and are therefore in line for an enormous payday. As well as this, the two founders will remain in charge of MVMT following the acquisition.

MVMT’s direct-to-consumer model is the latest trend within the current crop of successful start-ups. What also puts them at the cutting-edge is their extensive and highly effective use of social media to market themselves. Apart from a few notable exceptions, Daniel Wellington being one of them, this has been and still is  seriously lacking within the watch industry. What’s even more telling is that Movado would prefer to just throw $200 million dollars at the problem rather than attempting to innovate in-house.

MVMT have shown the watch industry the way when it comes to effectively harnessing a younger audience. Disregarding them as little more than style over substance really misses the point in the brand and what its consumers are after; ironically, the movement is the last thing on their minds.

Posted in Uncategorized
Business as Usual!