Proving once again that their merchandise covers every single possible base, Metallica have teamed up with American watchmaker Nixon to produce a brand new collection of 9 watches. Each is designed to reflect a classic Metallica album, with the likes of ‘Kill ‘Em All’, ‘Ride the Lightning’, ‘Master of Puppets, ‘…And Justice for All’, and ‘Metallica’ (The Black Album) all making an appearance. The jewel in the crown of this latest collab is the limited edition ‘Sanitarium’ model, which retails at £625, with rest of the collection going for £117-£389. 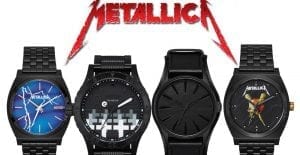 From left to right: ‘Ride the Lightning’, ‘Master of Puppets’, ‘Metallica’ (The Black Album), ‘Kill ‘Em All’

Both brand and band alike are stating that they’ve decide to unite due to their mutual sideways thinking ethos. Nixon was founded in 1998 with a vision to give people team-designed, custom-built products, and since then has gone on to very successfully occupy that corner of the market. Metallica’s roots can similarly be traced to the underground, but since these beginnings they’ve gone on to become of the most commercially successful and popular acts in modern rock, selling over 120 million albums to date.

The watches are due to be released on 5th November, with fans being able to pre-order on Metallica’s website. What’s more, this is only the first installment of a two-part collaboration, the second part of which is scheduled to come out later this year.